We recently had the pleasure of visiting Hemenway’s in Providence RI, a place billed as “a Providence Seafood Classic.” It was a Saturday evening and the place was hopping. The space is an open design with a very high ceiling. Thus, the noise level is extreme, to the point that trying to hear our server explain the specials was nearly impossible. While the noise was a bit of a detraction, it did not diminish our overall enjoyment of the venue. 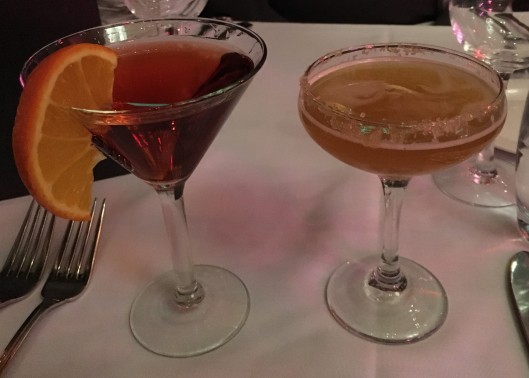 We started with a brace of cocktails… Given the look of the bar, our hopes were high. Therefore, we went the classic route – Negroni, Sidecar and Moscow Mule. The Negroni was well-made, although Carpano Antico was not available. The Sidecar was also well-made, including the proper sugar-rimmed coupe. Balance-wise, I prefer Sidecars a little heavier on the Triple Sec. This one was a trifle bitter. The Moscow Mule was, in a word, just wrong. The cocktail was fine but the signature copper mug was missing. Was it a total deal-breaker? No, but if you are going to serve one of the most identifiable cocktails of the last century, please have the proper “glassware.”

We went with a few of the classic starters. Bacon & Scallion Wrapped Scallops with a soy-ginger dipping sauce were very good. I prefer the bacon a bit less crispy, and the scallions seemed to be AWOL, but the soy-ginger dipping sauce was a nice touch. Crab & Lobster Cakes with roasted chili & citrus aioli, and a fresh herb & radish salad were moist, plump and flavorful. The Caesar Salad with focaccia croutons, and Grana Padano cheese was classic, fresh and enticing. 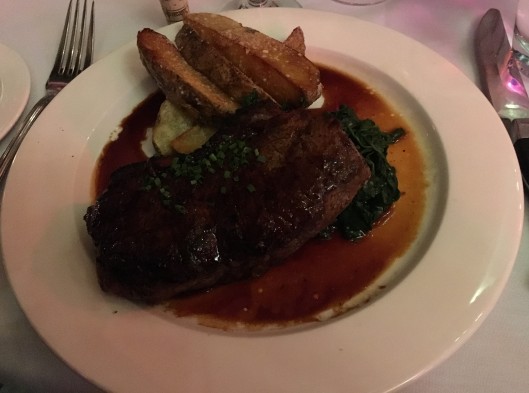 For a seafood restaurant, only one of us had a seafood main course. The balance were steaks and they were superb. The 8 Oz. Angus Filet Mignon accompanied by yukon mashed potatoes, grilled asparagus, and a red-wine demi glaze was tender and juicy, cooked to a perfect medium. The 12 Oz. Certified Angus New York Strip accompanied by parmesan-truffle steak fries, sautéed spinach, and a sauce bordelaise was exceptional, again cooked to a perfect “Pittsburgh style.” All of the sides were tasty, as were the sauces. The seafood main course was a Chilled Seafood Medley Salad consisting of shrimp, crab, lobster, Jeffery’s greens, feta cheese, shaved red onion, toasted pistachios, orange supreme, and drizzled with a preserved lemon vinaigrette. The Medley had quite possibly the largest jumbo shrimp I had ever seen and was stuffed with oodles of the other listed ingredients. It is clear why Hemenway’s earned their moniker as “Providence Seafood Classic.”

We finished with some artistic sweets. Warm Toffee Cake with a pear and cranberry compote, cinnamon raisin ice cream, oat crisp, and a warm toffee sauce, was delicious and so appropriate given the freezing temperatures outside. The Bourbon Pecan Tart with whipped vanilla sauce, candied pecans, and chocolate whiskey ice cream was also yummy and appropriately comforting. 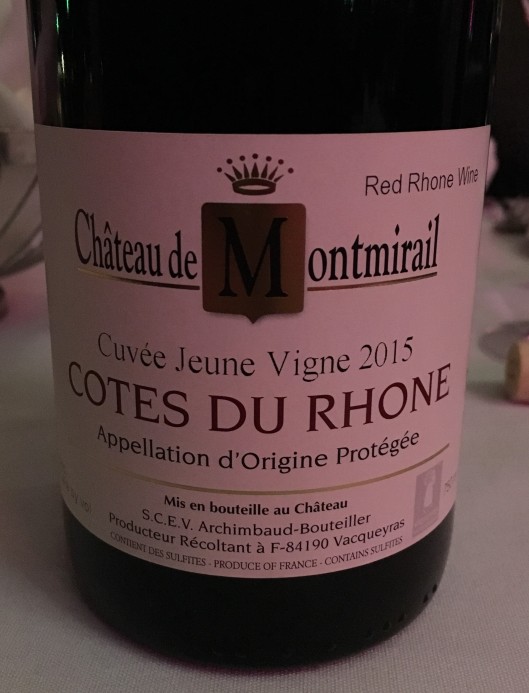 We also enjoyed a nice bottle of 2015 Château Montmirail Cotes du Rhone which was reasonably priced and paired wonderfully with the steak. My one complaint – accuracy in the wine list… For starters, the wine was listed as a Vacqueyras… Not a big deal, but CDR is not Vacqueyras, despite being adjacent to one another. Also, the listed vintage was 2013, not 2015… again, not a big deal, but I think the 2013 would have been drinking better than the 2015… Completely understand that restaurants can only serve what is available…

Overall, Hemenway’s was a great evening out. The things that mattered most – food and service were impeccable. Ambiance was lacking and beverage service was on par, but not quite perfect. Value-wise, while the meal was not inexpensive, it was certainly worth the price. We’ll be back, probably on a week night to see if that reduces the noise and makes the space a little more intimate.