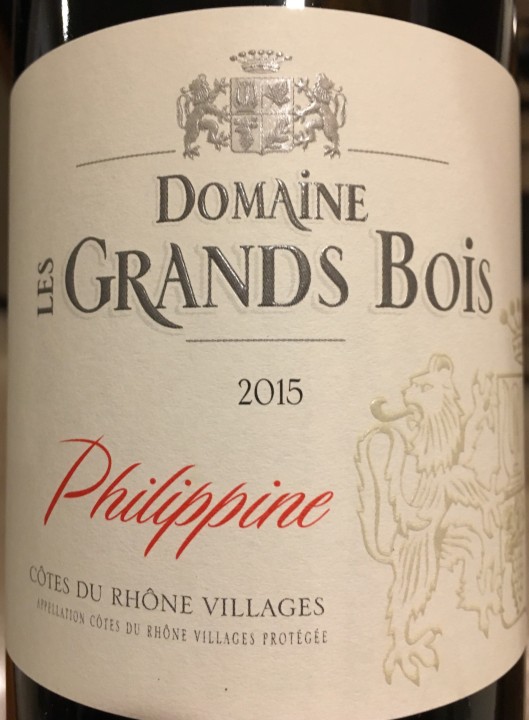 Well, history may be repeating itself… And this could be a great thing. Back in 2000, the 1998 vintage was being released from the Rhone, specifically the Southern Rhone and the surrounding regions of Côtes du Languedoc, Côtes du Roussillon and Provence. The wines were magical, especially the Rhone-based wines and they have proven, with almost twenty years of aging to be truly superb. At the time, we bought over a hundred cases of these wines. They were incredible values and have all stood the test of time, especially the Châteauneuf du Pape wines.

Early indicators are that the 2015 vintage, slowly coming to market this year is showing remarkably similar characteristics. The downside is that many of the properties that were outrageous values in 2000 have become quite pricey. This is not the case for one such estate, Domaine Les Grands Bois. In 2000, we scooped up several cases of their Cuvée Gabrielle, which was then retailing for $11.99 pre-discount. Recent sampling shows a wine that has become more complex and more refined, but is still strong and worthy of enjoyment.

Recently I was offered the 2015 Cuvée Philippine and it is stunning. The wine is showing all the characteristics of the 1998, perhaps with just a hint more blackberry jam. At $17.99 pre-discount the wine is a tremendous bargain. Yes, the price represents a 33% increase in price, but over 19 years that increase translates to less than 1.7% annually, which is far below the average cost of living increase…

Domaine Les Grands Bois is a small (approximately 110 acres) property with vineyards in several prized appellations. The winery itself was started in 1920 by Albert Farjon in Sainte-Cécile-les-Vignes, just outside of the city of Orange. Albert was a farmer at heart and spent most of his time cultivating the vineyards, understanding the importance and distinction of an estate-owned property. Today, the property is owned and operated by Albert’s niece, Mireille and her husband Marc, together with their three daughters, Philippine, Gabrielle and Eloïse.

The vineyards of Domaine Les Grands Bois are spread over seven communes, located in Sainte Cécile les Vignes, Lagarde-Paréol, Suze la Rousse, Tulette, Cairanne, Rasteau, and Travaillan. The properties are at an average altitude of 400 feet with a wide-variety of soil types, consisting of clay-limestone, red stony clays, and large granitic pebbles. The soil types are critical to a slow, even growing cycle, by storing heat during the day, and releasing that energy at night to keep the vines warm. Additionally, gravelly alluvium and soft, moderately moist sandy clays are also found, which promote excellent drainage and prevent rot.

The overall climate is Mediterranean with very little Summer precipitation, and extraordinary sunshine. The Mistral, the often-gale-force wind that blows through the region, is a factor, which is managed through appropriate trellising and pruning.

The winery produces nine bottlings from several important appellations: Côtes du Rhône Villages Cairanne, Côtes du Rhône Villages, Côtes du Rhône, and Rasteau. Many of the bottlings are cuvées named for the proprietors and their children. The wines are all a blend of Grenache, Mourvèdre, Syrah and Carignan, although they lean heavily (55%) towards Grenache. Over 75% of the vines date back to 1950, with a small percentage dating back to 1902, making most of the crop Vielle Vigne, or “Old Vines.” Vineyard management is meticulous and harvesting is performed by hand.

The winery itself dates to 1929, but was extensively renovated and updated in 1990, with the introduction of stainless steel fermentation vats, concrete aging tanks and barriques for extended maturation.

The 2015 Domaine Les Grands Bois Cuvée Philippine is a Côtes du Rhone Villages and it is a monster of a wine. With dark, jammy fruit and forceful, but integrated tannins, the wine will age beautifully. If a recent taste of the 1998 is any indication, buying several cases would be the way to go. And at $17.99 pre-discount, the wine is a tremendous value.