Who knew that the folks living in Estonia make a wonderful liqueur (liköör)? I sure as hell didn’t until a recent foray had me stumbling upon Vana Tallinn (or “Old Tallinn” in Estonian) in the amari/liqueur aisle. Because I am a true adventurer at heart, I had to pick up a bottle and give it a try. To my surprise, the spirit is actually quite fetching.

Vana Tallinn is a dark, amber colored rum-based liqueur flavored with a secret blend of spices, including vanilla, cinnamon and citrus oils. The web site (www.vanatallinn.eu) unfurls like a game of Myst, filled with a mélange of marketing and folklore.

I have not yet started to experiment, although the web site has a curious list of cocktails…

Highly aromatic with honey and floral hints. Full-bodied and velvety sweet, which artfully covers the alcoholic nature of the spirit. Long finish with butterscotch and anise. Really enjoyable as an after-dinner sipping treat.

A very close friend asked if I would help create a special cocktail for her 25th college reunion… It needed to be somewhat thematic, or at least… green.

Well, when one scans the horizon for the available choices in green spirits, one does not exactly find a panoply of stars… Let’s see… Green Chartreuse… Crème de Menthe, Apple Pucker and Midori… Sure there are probably a few more, but isn’t the current list bad enough? Excepting Green Chartreuse, or course…

Everyone who knows me, knows that I love a challenge, so we settled down with a bottle of each of the aforementioned lovelies, the balance of my well-stocked bar and a long Sunday afternoon… The results were surprisingly positive…

In the area of Green Chartreuse, I could find nothing that created a suitably green drink that was actually palatable. Most turned out a dull ocher or median rust color… far from the requisite green.

With the Apple Pucker, we turned out a respectable “Apple-tini” that was refreshing and quite nice:

Combine the ingredients in a shaker with crushed ice, shake vigorously to chill and strain into a cocktail glass. Garnish with an apple peel.

With the Midori, we turned out a respectable tropical-influenced riff on a Daiquiri/Sidecar:

Combine the ingredients in a shaker with crushed ice, shake vigorously to chill and strain into a cocktail glass. Garnish with a lemon or lime peel.

With the Crème de Menthe, we turned out a (shockingly) respectable homage to mint parfait:

Combine the ingredients in a shaker with crushed ice, shake vigorously to chill and strain into a cocktail glass.

So, in the final analysis, we found three very good uses for a few spirits that have usually found their way to the way back of the bar… I can’t wait until St. Patty’s Day!!

Rioja is arguably Spain’s most well-known wine region and may in fact be one of its oldest. Evidence of grape cultivation goes back to medieval times, with some historians claiming even earlier evidence of Phoenician and possibly even Greek wine making in the region.

If you look back in my archives to a posting from March 24, 2012, you will find the requisite technical details concerning the wines of Rioja, which I will not bother to repeat here…

Instead, let’s spend some time talking about one of my all-time favorite Rioja producers – Marqués de Cáceres and their wonderful Gran Reserva…

Marqués de Cáceres, while not the oldest bodega in Rioja, is the product of a long tradition of wine making. Founded in 1970 by Enrique Forner, the descendent of successful Bordeaux wine makers, in conjunction with supervision from Emile Penaud, arguably one of Bordeaux’s most famous wine makers, Marqués de Cáceres was the first new winery in Rioja in nearly 50 years. The outstanding Bordeaux lineage produces wines of impeccable quality, with classic, elegantly structured characters, but with the unmistakable imprint of traditional Rioja wines. The winery is located in Cenicero, which is in La Rioja Alta and maintains a facility with over 40,000 aging barrels and over 10 million bottles of wine in their cellars. The wines are primarily Tempranillo-based, but do contain quantities of Garnacha and Graciano. In the case of the 2004 Gran Reserva, the wine is 85% Tempranillo and 15% Garnacha and Graciano. The vintage is highly regarded in Spain, with near ideal conditions throughout the growing season and into harvest time. The wines from the vintage tend to have solid structure with good fruit density, which translates to above average aging potential – this Gran Reserva is no exception…

At an average bottle price of $29.99 before the discount, this wine is a very respectable value.

“Shoulder” seasons demand “shoulder” cocktails and I am willing myself into spring, despite the unseasonably cold temperatures and generally inclement weather pattern these last few weeks.

That said, nothing says “shoulder” cocktail better than spiced rum… Yes, typically rum is a summer/southern climes kind of spirit, but when combined with the correct ingredients it works in non-summery seasons.

Pray tell, what would those ingredients be? How about Domaine Canton (ginger liqueur) and traditional Framboise (raspberry liqueur)… So I wish I could claim this cocktail as my own, but alas the clever folks at SpiritedLA (http://spiritedla.tumblr.com/) are the originators. I also wish it had a great, classic story…perhaps it will 100 years from now…

At any rate, on first blush the cocktail does seem like it could be too sweet, but the choice of liqueurs, both of which have a natural tartness to their characters, tempers what could be a cloying, sickening mess. I may choose to experiment with a spoonful of lemon juice, as well – nothing like bench testing to ease oneself into the weekend… 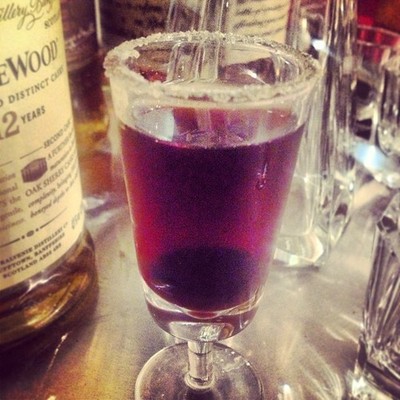 Combine with crushed ice in a shaker, mix and strain into a cocktail glass rimmed with honey, ginger and raw sugar – garnish with a Luxardo cherry.

The south of France has many charms and the dark, red wines of the Côtes du Roussillon Villages are a real pleasure, especially in a great vintage like 2009.

The larger area known collectively as the Languedoc-Roussillon is an expansive region stretching from about the city of Nimes in the east to the border of Spain. While thought of as one large region, the area is actually two distinct appellations: Languedoc in the north and Roussillon in the south. If one were to provide an overarching stereotype to the two regions, one might say that the Languedoc has more in common, stylistically with the southern Rhone region, while Roussillon shares more in common with southeastern Spanish regions. No matter, the wines that hail from either area are quite diverse, but all share a more rustic style – the reds especially are big, dark-complexioned with flavors that give an obvious nod to their surroundings.

The smaller region of Côtes du Roussillon Villages is reserved for higher-quality red wines from the greater Roussillon region. Located in the hilly northern part of the Roussillon, the vineyards in the region have a long track record of producing a higher-tier of quality wines. The Côtes du Roussillon Villages does contain four named sub-regions: Caramany, Latour de France, Lesquerde and Tautavel, which may be listed on the label if the grapes originate from within their boundaries. If no designation is made, then the grapes hail from non-designated parcels.

Soil types vary in the overall region, but the presence of the ubiquitous garrigue (low-lying scrub brush on limestone soils) imprints much of what is produced. The climate is resolutely Mediterranean in character – hot, dry with some moderating winds, which makes for a ripe, disease-free crop.

The Mas Lavail Tradition is a blend of 40% Shiraz, 40% Carignan and 20% Grenache Noir, which is the usual cast of characters in this region. In researching the wine, I found the following from the importer’s web site:

Nicolas Batlle, an enthusiastic young winegrower, farms the lands of the Mas de Lavail with his family in the heart of the Maury appellation in the Rousillon region.

This exceptional terroir consists of black shale and calcareous marl set between the Corbières and the Pyrenees at the foot of the Cathar castle, Quéribus. This location has a micro-climate which is favourable to noble grape varieties such as Grenache, Carignan and Syrah.

The property’s wines are produced from old vines and are concentrated, generous and elegant.

I also found the “technical” details of the wine – The vineyard comprises 8.04 hectares (19.54 acres) with an average vine age of 60 years. The soil type is listed as limestone-clay and the vineyard is noted as being “traditionally” managed. I assume that the term differentiates practices that would otherwise be considered “organic” or “biodynamic.” Grapes are harvested manually and are vinified, again, using “traditional” methods. A long maceration time is noted, which clearly is evidenced in the deep color of the wine. Total production is set at 30,000 bottles and it appears that the wines are aged for 12 months before bottling. The winemaker notes a 5 year aging potential, which I confirmed with my own tasting.

Ripe, Jammy nose with explosive fruit – garrigue, pepper and floral hints. Full-bodied with moderate acidity and firm, dry tannin. Dark fruit core with black cherry, tar and spice notes. Moderate length with a layered finish – very nice. Drinking well now and should improve with another 3 to 5 years in the bottle.

At an average bottle price of $16.99 before the discount, this wine is a very respectable value.