Costières de Nîmes is located in the southernmost part of the Rhône valley and has a very long wine making history going back nearly 2000 years, making it one of the oldest vineyards in Europe. The region was settled by veterans of Julius Caesar’s campaigns in Egypt, and some bottles of Costières de Nîmes bear the symbol of the Roman settlement at Nîmes, a crocodile chained to a palm tree. Local lore speaks of a chart in the kitchen of the Palais des Papes in Avignon, indicating that many of the towns in what is now the Costieres de Nîmes region were the main suppliers of wine to the Popes of that era.

The current region was formerly known as Costières du Gard, designated a VDQS level wine. In 1986 the wine was granted AOC status and was ultimately renamed Costières de Nîmes in 1989. Originally a part of the Languedoc department, in 1998 the local growers’ organization requested that the appellation be attached to the Rhône wine region, largely because the style of the Costières de Nîmes wines are more reflective of the typical characteristics of Rhône valley wines. The transition finally took effect on July 19, 2004.

The soil of the region is mostly a mixture of round pebbles (“galets”) similar to Châteauneuf-du-Pape, with sandy alluvial deposits and red shale throughout. The soil depth from 9 to 45 feet is largely responsible for the variations of style within the AOC. The climate is Mediterranean, similar to that of the Rhône valley, but is influenced strongly by its proximity to the coast and the accompanying sea breezes.

Costières de Nîmes produces mostly red wines (59%), with a blend of Syrah, Mourvèdre, Grenache, Carignan and Cinsault.  White wine production accounts for about 4% of the AOC production and are made from the Bourboulenc, Clairette Blanc, Grenache Blanc, Maccabéo, Rolle, Roussanne and Ugni Blanc varieties. The whites must be blended from a minimum of two of the listed varieties. Rosé wine production accounts for approximately 37% of the total production, made from the same blends of red and white grapes previously mentioned. 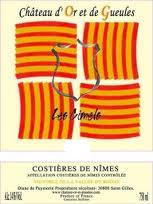 The Château d’Or is a gutsy wine made from equal parts Syrah, Grenache and Carignan and is a classic expression of southern Rhône wine. If you like hearty, full-bodied reds, then this wine will put a smile on your face.

At an average bottle price of $14.99 before the discount, this wine is a very respectable value.