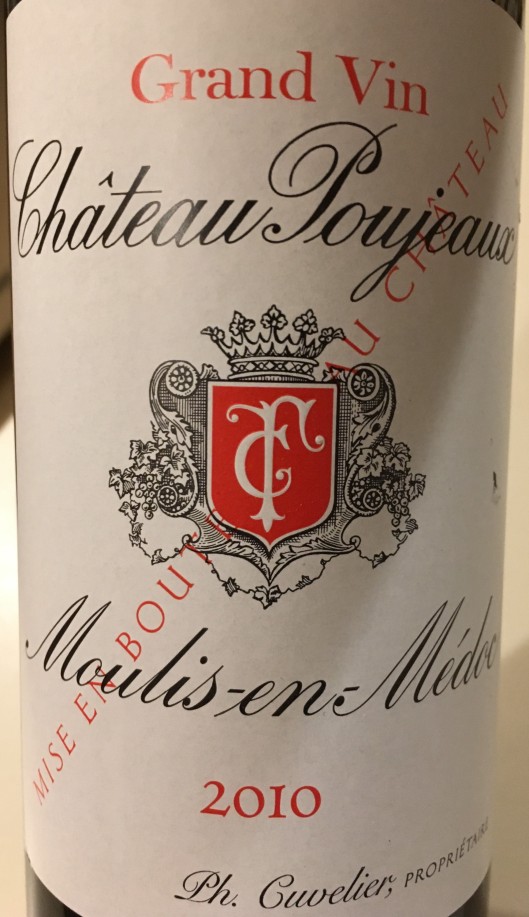 Wine making in Moulis, the Bordeaux commune from which Château Poujeaux originates, dates to the Romans. Evidence of several Roman vineyards have been found in Moulis, with genetic material uncovered of the Biturica grape, which was believed to be the first grape cultivated by the Romans in Bordeaux. Like many grapes found in France in ancient Roman vineyards, the trail leads back to Spain. In fact, it is believed that the Romans brought the Balisca grape from Spain to Southwest France and began cultivation of vines in Bordeaux. The natural harbor and the well-drained soil was a primary factor in the Romans choosing Bordeaux as a major wine center. Over time, it is believed that the Biturica grape evolved into Cabernet Sauvignon, although it is more likely that the evolution produced Carménère instead. Whichever is the case, we can be thankful that the Romans did what they did, because the modern wines from Moulis are wonderful.

Another interesting fact – the name Moulis derives from the word Moulin, or Mill. The commune owes its name to the historic use of the region, after the Romans departed, which was the milling of grain. Once the Dutch entered the picture and made substantial investments to dramatically increase wine production for export by the Dutch East India Company, the grain milling days of Moulis ended.

Château Poujeaux is arguably one of the best properties in Moulis, vying for attention with another well-known Moulis property, Chasse-Spleen. Both are favorites of mine and our cellar has vintages of both wines going back to 1970. In 2003, the Cru Bourgeois reclassification bumped Poujeaux, along with eight other wines into the higher-level category of Cru Bourgeois Exceptionnels, worthy recognition for sure. The property was owned for many generations by the Theil family until early 2008. At that point, ownership changed to Philippe Cuvelier, who is also owner of the Saint-Émilion property, Clos Fourtet.

The property itself consists of approximately 126 acres under vine, with the typical blend of grapes to be 50% Cabernet Sauvignon, 40% Merlot, 5% Cabernet Franc and 5% Petit Verdot. Unlike neighboring communes Margaux and Graves, the soils of Moulis have smaller concentrations of gravel mixed with clay and limestone. While not ideal, the soil type is beneficial for Merlot, which likely is a factor in the blend.

Unlike the West Coast of the United States, specifically, California, vintage quality and character can vary widely from year-to-year. Case in point, comparing and contrasting 2009 with 2010 offers a very good example. With the 2009 vintage, my experience with Bordeaux is a story about lush, jammy wines that have well-integrated tannins. Approachable and quaffable from their youth with solid potential to improve. With the 2010 vintage, my experience is more a story of intense structure with deeper, darker fruits that are more tightly wound. The wines are drinking okay, but it is clear that 2010 is more of a “classic” Bordeaux vintage, requiring some bottle age to produce wines of exquisite beauty.

This is clearly evident in Poujeaux, where the 2010 is absolutely classic Right Bank Bordeaux. A dense, dark fruit palate is supported by great tannic structure and while the wine is nice to drink now, I can see that the wine has tremendous potential. Compare the 2009 and you find a wine that is far less structured, with a rounder, simpler palate. The potential is harder to see in the 2009, although I expect the wine to age nicely.

Interestingly, the 2010 is priced at about $10 less than the current retail price of the 2009, which is often the case when a less-opulent, less-touted vintage arrives – as it is with 2010 versus 2009. Based on my notes and experience, I would buy and lay down the 2010 now before the price creeps and if you haven’t already purchased the 2009, pass.