Northwest Spain – Galicia… Green Spain as some folk call it… Unlike the central and southern portions of Spain, where the climate varies from Mediterranean to arid, desert-like conditions, Galicia is very wet, being heavily influenced by the Atlantic Ocean. The rainfall, nearly 50 inches a year combined with over 2000 hours of sunshine produces a humid, rainforest-like environment that is quite verdant, hence the nickname, Green Spain.

There are five Denominación de Origen (DO) in Galicia: Monterrei, Rías Baixas, Ribeira Sacra, Ribeiro and Valdeorras. The area is largely isolated from the rest of Spain, which accounts for the fact that stylistically, the wines of Galicia have more in common with Portugal than the rest of Spain.

The most popular and well-known DO in Galicia is Rías Baixas and produces amazing white wine from the indigenous Albariño grape. Overall, 90% of the wine produced in Rías Baixas is made from the Albariño grape. The vineyard soils of the region are granite based and well situated for the damp maritime climate of the area. While the rest of Galicia enjoys a reputation for high grape yields, Rías Baixas keeps the yield of its Albariño plantings low in order to produce concentrated fruity and fragrant wine. Known for fantastically perfumed noses, Albariño from Rías Baixas is best enjoyed young, slightly chilled on a hot summer’s day. 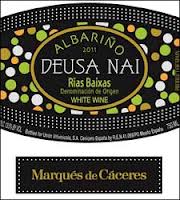 Marqués de Cáceres is known for producing the full range of Rioja wines. The Deusa Nai is their newest wine and it falls well outside of their usual Ebro Valley homeland. The name means “Mother Goddess,” or one who protects the earth’s fertility. The initial production is relatively small, only 6,600 cases, but the limited production has put a focus on quality. The Deusa Nai is textbook Albarino with a lush, perfumed nose, but the wine possesses a depth and elegance, which is a bit uncharacteristic of the variety and the region. I guess I shouldn’t be surprised, given the wineries track record for outstanding Rioja wine – that and the fact that globe-trotting wine Guru Michel Roland is their consultant…

At an average bottle price of $13.99 before the discount, this wine is a very respectable value.