I was in a local wine store – Martignetti’s Fine Wines in Brighton, MA on Soldier’s Field Road and spied a new display… a curious collection of Corsican wines… My attention was piqued for several reasons: one, Corsica is the birthplace of Napoleon I, someone who I have spent countless hours studying; and two, I have had only one Corsican wine in nearly thirty years of tasting, so an opportunity to taste another seven seemed like a fun learning adventure!

First, a bit about Corsica, the most mountainous island in the Mediterranean Sea, located about 55 miles west of Italy and 105 miles south of France. Politically, Corsica belongs to France, but its wine tradition belongs to Italy. The island is believed to have been settled in 570 BC – by Phoceans traders, Greek colonists from the west coast of Anatolia. Among the many things the Phoceans brought in their travels was cultivation of the vine. Vines thrived until the late 7th and early 8th Centuries AD, when Corsica fell under Islamic rule, a culture that banned the production and drinking of wine. With the turning back of the Islamic incursion, Corsica came under the control of Pisa in Tuscany around 800 AD. With Tuscany came a return of the vine and the grape flourished. In around 1200 AD the Genoese took over from the Pisans and continued to highly develop viticulture on the island, introducing a Sangiovese clone to the island that would become the Nielluccio grape. Corsica continued to thrive as a Genoese state, when in 1769 AD the island was ceded to France. It was in that same year that Napoleon I was born in the town of Ajaccio. With France, cultivation of the vine continued to thrive, and the French sought to bolster the sagging island economy with a strongly promoted wine industry. The Phylloxera epidemic of the mid 19th Century crippled the wine industry on Corsica, and eventually the poor economic conditions forced mass depopulation of the island as Corsicans sought refuge elsewhere. Life ebbed on the island until Algeria finally gained independence from France in 1962 and many French pieds-noirs immigrated to Corsica and began planting new vines. Vineyard plantings grew four times during this period, but it was a case of quantity over quality, with gallons of cheap, low end wine flowing out of Corsica and into the burgeoning European “wine lake.” Like many wine regions across Europe, in the 1980’s subsidies were provided to reduce low quality vineyard plantings, as well as invest in more modern wine making technologies. The result of these subsidies is a new era in quality wine production on the island, which has piqued the interest of such noted wine importers as Kermit Lynch.

The climate and geography of Corsica are well suited for grape cultivation. Corsica is warmer and dryer than France, with very little diurnal variation, which means even and quick ripening of the grapes. The lack of rainfall during August and September contributes to rot-free harvests. The soils on the island are widely varied with the northern island (Cap Corse) consisting primarily of schist; the mid island (Patrimonio) consisting of limestone, chalk and clay; the west island consisting of granitic soils; and lastly the east island consists largely of marly, sandy soils. The mountainous terrain can make vineyard management challenging, but the elevation keeps temperatures moderate.

The principle red grapes grown on Corsica are Nielluccio, Sciaccarello, Barbarossa and Aleatico. Nielluccio is thought to be a clone of Sangiovese as noted previously and is found primarily in the northern regions of Corsica. The grape likes limestone soil and can produce wines with great finesse and structure. Sciaccarello is a native grape that is found primarily in the southern regions of Corsica. The grape prefers granitic soils and has a powerful nose and a widely-varied flavor profile, making wines that are very much like French Pinot Noir. Barbarossa is another native grape that is widely planted in the southern regions of Corsica and tends to produce light, fruity wines. Aleatico is a grape of Italian origin and is believed to be related to the Muscat grape. Aleatico is grown primarily on the eastern side of the island, as well as in the Cap-Corse to the north, but it is only allowed as a blending grape delimited as Vin de Pays de l’Ile de Beauté. Aleatico is also the basis of the fortified red Vin Doux Naturel produced in the Cap-Corse named Rappu.

The principle white grapes on Corsica are the Vermentino, Bianco Gentile and Muscat Blanc à Petit Grains. Vermentino is a well-known grape planted throughout the Mediterranean, likely originating from the Iberian Peninsula. The grape is planted across Corsica and yields wine of great personality with perfumed, head aromas. Bianco Gentile is a native variety that is quite rare and only rediscovered during the 1990’s. The grape is capable of producing wines of great finesse with layers of fruity complexity. Muscat Blanc à Petit Grains is primarily planted in the northern Cap-Corse region where it is used to make Vin Doux Naturel wines.

The wine regions of Corsica are defined by the French AOC. There are nine specific AOC regions and one Vin de Pays region on the island. The regions breakdown as follows:

The only island-wide region is the Vin de Pays de l’Ile de Beauté, which accounts for almost 70% of the island’s wine production. 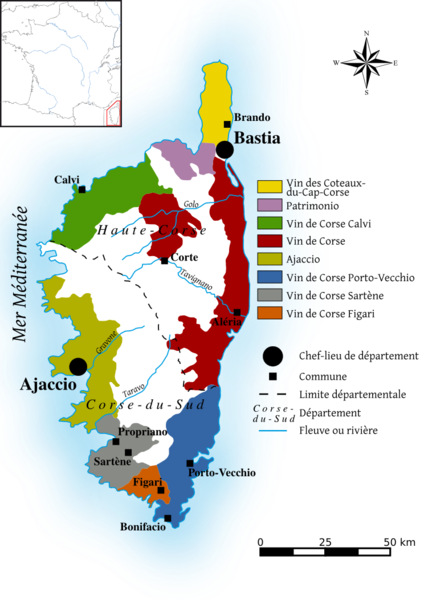 The wines that were tasted recently are the following:

Lovely nose with a nice mix of fresh fruit and mineral hints – light on the palate with a crisp finish – well balanced. Average retail $29.99

My overall impression – I liked most of the whites and the first of the reds, but generally I did not think that the wines were worth the price… It was still a worthwhile exercise!