Pinot Noir is a finicky grape that unlike Cabernet Sauvignon and Chardonnay is not a world traveler. Pinot Noir made its fame in the vineyards of the Côte d’Or, where it can command astronomical prices and produce some of the most beautifully complex wines on the planet. In Champagne, Pinot Noir is one of two black grapes that go into the production of some of the world’s most luxurious sparkling wines.

In the US, the grape has found a few places where the climate and soil are particularly hospitable and produce some very noteworthy Pinot Noir. The area that has probably received the most press of late is California’s Central Coast. I’ve blogged about the Central Coast, specifically the Santa Rita Hills before (https://blog.musingsonthevine.com/2012/09/10/santa-rita-hills-update/), so my readers know of my deep appreciation for the region. We also have family in the area, so reasonably frequent visits have allowed for much exploration and enjoyment at the well over 350+ wineries in the region.

While cruising the wine aisles recently I ran across what I will call a “blast from the past.” When I was first discovering wine, I made a point of visiting my favorite wine shops weekly to collect up mixed cases of various wines that the proprietors deemed “important,” or at least “instructive.” Among these early cases were several nascent wineries from California that were noted for genuine quality and had a bit of the pioneer in their hearts. Among those cases were bottles of Wild Horse Winery and Vineyard Pinot Noirs. 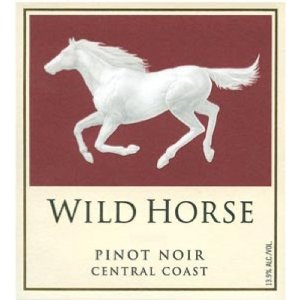 Wild Horse, located in Templeton California is in the heart of the Central Coast region, just south of Paso Robles. According to their web site (http://www.wildhorsewinery.com/Winery/Our-Story) they got their start making “our first wine in a plastic tub. Stirred it with a baseball bat. It was a senior project at Cal Poly that very quickly became a reason to be.” In 1981, they bought their first vineyards and produced their first vintage two years later. The name of the winery presumably is a tribute to the herds of wild mustangs that roamed over the hillsides in the area for decades. That, and possibly a tribute to Cal Poly’s mascot, a galloping horse. Wild Horse has come a long way over the last thirty years and despite being one of the “darlings” of the Central Coast, they have remained grounded, pun intended. We visited the winery a few years ago and found a commitment to the land and a commitment to quality, which pays homage to their humble beginnings.

Are their more impressive wines coming out of the Central Coast? Perhaps, but for the money, Wild Horse is a good story and a very good wine.