I tend not to follow wine fads… They burn out relatively quickly and frankly do more harm than good. A current fad that seems to be running its course is Argentine Malbec… but first a bit about Argentina…

Argentina is considered the most important Latin American wine producing country, with the largest amount of land under vine (209,000 Hectares, or 504,000 Acres) and the largest per capita consumption rate for wine (40.99 Liters, or 10.8 Gallons).

Argentina has a wide range of climates, mostly temperate due to the broad extent and varying elevations of the vineyards. Water is plentiful, land is cheap and there is a potential market of 35 Million residents who are of European heritage with an in-grained culture of wine drinking. So, why isn’t Argentina’s wine industry stronger? Simply put a lack of economic stability. With rampant inflation, the devaluation of the Peso and the recent change (1991) to an open market government, the wine industry has largely focused on producing large volumes of mediocre table wines.

This is slowly changing, which is evident from the increase in foreign investment and the increased availability of finer, Argentine wines.

The history of the Argentine wine industry begins with its colonization by the Spanish:

In each case, missionaries accompanied the settlers, bringing God and the vine to Argentina. These initial plantings were likely the Criolla grape, which made only mediocre sacramental wines. Over time, plantings grew to include the more familiar European varieties.

The evolution of the Argentine wine industry was largely due to three factors:

The wine industry continued to grow throughout the 20th Century, peaking in 1976, largely due to exportation of cheap wine to Chile. It was at this time that Argentina was recognized as a country with “great wine-making potential” in the press. This led to Argentine wine makers actively and aggressively pursuing the export markets of Britain and America. The strategy met with success and exports shifted from cheaper, table wines intended for Chile, to finer wines destined for Europe and America. Production ramped-up to meet demand and it appeared as if Argentina was transforming into a true fine wine producer.

However, all of this success was destroyed by the invasion of the Falkland Islands in 1982. Overnight, the lucrative export markets outside of Latin America were gone and the wine being produced was too expensive for the cheap, Chilean market, which resulted in vast overproduction that led the industry to crash.

Upon cessation of hostilities Argentina set about rebuilding their wine industry. Over the following ten years the wine industry began to revive, fueled in large part to the regime change in Buenos Aires (1991). In the last ten years, the availability of hard currency, more foreign investment and the re-establishment of an export market for fine wines have allowed Argentina to build a strong, fine wine industry with even greater growth potential in the future.

The Instituto Nacional de Vitivinicultura (I.N.V) is responsible for organizing and administering the regions and wine laws of Argentina. The INV has established four basic regions in Argentina:

The INV has also established an appellation system, like those of Europe, called the Denominación de Origen Controlada of DOC. The first appearance of the DOC on an Argentine wine label was 1992 (San Rafael). There are two regions officially recognized as DOC regions: San Raphael and Luján de Cuyo. Most old time producers do not believe in the DOC system, largely due to years of governmental distrust. More modern producers do not believe in the DOC system because they do not want to be “handcuffed” to antiquated rules like their European counterparts. The fact that the DOC is largely overlooked by the wine makers means that most labels are without any kind of DOC specified and the likelihood of more classifications is doubtful.

Despite the lack of a generally-accepted DOC system, there are many regions that are noted for fine wine production.

Today, the craze is all about Malbec from Argentina – below are two from the same winery, AVE that I found noteworthy. 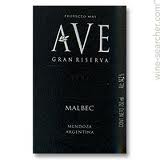 My tasting notes for the wines:

Intense, rich nose with black cherry, anise menthol and cedar hints. Full-bodied with moderate acidity and firm, dry tannin – well balanced. Black cherry on the palate with vanilla, cedar and tar notes. Long finish, smooth with a nice allspice and dried fruit aftertaste. Drinking well and should benefit from another 5 to 7 years in the bottle.